Capacity testing (level 2) can be used to assess infiltration rates or available sediment storage capacity of biologically enhanced practices. Hydraulic conductivity tests for biologically enhanced practices are applicable to bioretention practices, filter strips, and most swales. Sediment retention tests are applicable to constructed wetlands because they are often designed to remove large quantities of sediment. Simple visual evidence of sediment accumulation in rain gardens, filter strips, or swales indicates that the practice needs maintenance. A pre-treatment system, such as erosion control, street sweeping, or a sedimentation forebay could also be considered. Annual sediment retention tests for constructed wetlands, however, are useful for determining the sediment accumulation rate and the remaining capacity available for sediment storage.

If the bioretention practice is not infiltrating stormwater at the desired rate, the soil profile should be inspected for soil properties, including texture, color, moisture, and bulk density. For more information see Analysis of Water and Soils or Methods of Soil Analysis (Klute 1986).

Research has shown that saturated hydraulic conductivity can be estimated from soil texture classification (Clapp and Hornberger, 1978; Rawls et al., 1998; Saxton and Rawls, 2005). Table 11.2 is a table of saturated hydraulic conductivity based on USDA soil texture from various authors. Please note that each textural class has a range of possible values, and this table represents the average. 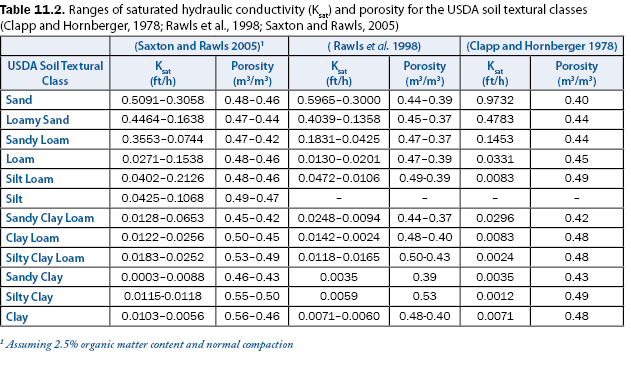 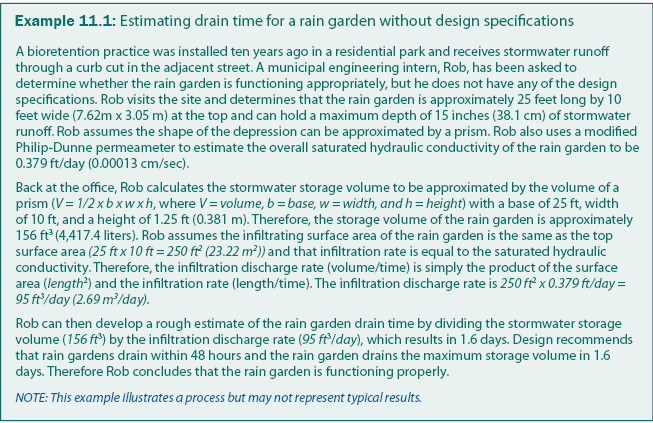 Sediment retention tests can be performed on a wetland to estimate the depth, and subsequently, volume, of sediment retained in a constructed wetland. Sediment surface elevations in a wetland are measured either with a level and level rod (from a boat) or with a sonar depth measurement device. The water surface can be used as a local elevation standard if a staff gauge has been installed in the pond to measure water surface elevation. Sonar depth measurements can be made in the winter when the wetland is covered with a layer of ice that is strong enough to walk on safely, or in the summer using waders or a boat. Corresponding longitude and latitude are recorded either with GPS or a total station. The amount of sediment retained in the constructed wetland can be estimated from the measured basin topography and the original basin topography (from as-built plans or design drawings). If sediment capacity testing is performed periodically, the rate of sediment accumulation can be estimated. The amount of retained sediment can also be compared to the design capacity to determine the available sediment retention capacity and to estimate when the wetland will require maintenance (i.e., sediment cleanout). These capacity tests should also be performed following construction to develop as-built plans.

Filter strips and swales rarely maintain standing water because they are designed for stormwater conveyance and not stormwater storage. Nevertheless, infiltrometer and/or permeameter tests can be performed on filter strips and swales to determine the stormwater infiltration rate. Some swales have berms or check dams to reduce flow velocities and store stormwater runoff temporarily, which increases sedimentation and infiltration. Hydraulic conductivity tests should be focused on the locations where infiltration occurs, or is likely to occur based on the design, such as upstream of a berm or check dam.