The Three Rivers Park District monitored the performance of a three-celled nutrient detention pond that was designed to reduce run-off volume and nutrient loading from a commercial development (Bass Creek Business Park) in the City of Plymouth. The water flows from the three-cell treatment pond to a wetland before discharging to Pike Lake. There have been numerous water quality models (e.g. P8, DETPOND) suggesting that multiple cell detention basins are more efficient at nutrient and sediment removal than single-cell ponds particularly when followed by wetland treatment. The Bass Creek Business Park was monitored to test the validity of the P8 model predictions.

The Bass Creek Business Park is located west of Highway 169 on Bass Lake Road along the northern border of the City of Plymouth. The watershed is approximately 76 acres that were primarily developed as commercial/industrial land use from 1996 through 1998 (Table 1; Figure 1). The three-celled nutrient detention pond receives runoff from 42 acres of commercial/industrial land use. A monitoring station (TP1) was located at the discharge point of the commercial/industrial area prior to draining to the first cell of the three-cell treatment pond. The three-celled nutrient detention pond discharges into a 5-acre wetland. A second monitoring station (TP2) was located at the outlet of the three-cell treatment pond that drains to the wetland. The wetland was to provide additional treatment prior to flowing to Pike Lake. Consequently, a third monitoring station (TP3) was located down stream of the wetland outlet prior to draining to Pike Lake.

Three Rivers Park District monitored each sampling site from 2004 through 2005. At each of the sampling sites, an automated sampler/flow data logger was installed to monitor continuous flow measurements from May through October. The data logger recorded changes in level, velocity, and flow at 1-minute intervals. The flow data loggers were programmed to initiate sample collection after a predetermined increase in water level was obtained. After sampling was initiated, flow-weighted composite water samples were sequentially collected to encompass the entire storm distribution. The anticipated storm events were based upon estimated precipitation volume. A tipping bucket rain gauge was installed at the TP2 sampling site to measure the actual amount of precipitation at 1-minute intervals. After each precipitation event, the water quality samples were collected within 24-hours. During extended periods without precipitation, grab samples were collected to determine nutrient concentrations during base flow conditions. All samples were labeled immediately after collection, stored in a cooler with ice, and delivered to the Three Rivers Park District for laboratory analysis. During each site visit, flow meter data was downloaded by a field laptop computer.

Three Rivers Park District analyzed each water quality sample for nutrient content. The water quality samples were analyzed for total phosphorus, soluble reactive phosphorus, total nitrogen, and total suspended solids. The Standard Methods for the Examination of Water and Wastewater (1995) was used to determine nutrient concentrations of the water samples. Sample analysis was prioritized by analyte holding time to ensure that analyses were completed within the recommended time interval. Samples were stored at 4° C in a refrigerator until all analysis was completed. A quality assurance and quality control protocol was followed to ensure the precision and accuracy of laboratory data analysis.

The P8 model was developed to assess nutrient removal efficiency of a three-cell NURP pond treatment device for the Bass Creek Business Park watershed. The same P8 model configuration was used to assess and compare performance of a single-cell NURP pond. The parameters entered into the model included the pervious and impervious sub-watershed characteristics (Table 1). The parameters corresponding to each treatment device included the morphological characteristics for each pond within the three-cell configuration as well as for the downstream wetland (Table 2). The rainfall data collected hourly at the monitoring site were used for model application, and a daily average temperature file was also developed from data collected at Crystal Airport in 2005. The flow network diagram further describes how the P8 model was set-up for the Bass Creek Business Park (Figure 2).

The model was initially calibrated to mimic the observed flow conditions during the sampling interval. Unfortunately, only two of the monitoring stations (TP1 & TP3) provided reliable flow information that could be used for model calibration. The TP2 monitoring site did not provide reliable flow measurements because the outlet weir structure was constantly obstructed with debris that inhibited drainage of the three-celled treatment pond into the wetland complex. The obstructions inhibiting flow at the TP2 sampling site did not appear to significantly affect upstream flow measurements due to the available storage capacity of the three-cell treatment pond. In addition, the TP1 sampling site was located far enough upstream of the three-cell treatment pond inlet to minimize any potential backwater effects. Consequently, the model was initially calibrated with flow data collected from the TP 1 monitoring site.

The observed nutrient concentrations are substantially higher than those estimated by the model (Figures 3-5). These discrepancies suggest that the wetland does not appear to be a treatment device, but appears to provide a source of nutrients downstream to Pike Lake. Consequently, it becomes difficult to calibrate the model for nutrient loading at the TP3 monitoring site because the model treats the wetland as a sedimentation device that removes nutrients. 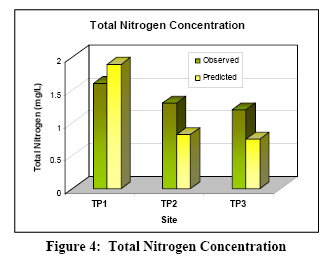 The P8 model indicates that the three-cell NURP pond treatment device substantially reduced the nutrient loading to the wetland. However, it appears that the wetland provides a primary source of nutrients to Pike Lake. The difficulty in calibrating the model to the observed conditions for the TP3 monitoring site indicates that the wetland does not conform to the anticipated standards that are necessary to classify the basin as a treatment device. The monitoring data indicate that the observed total phosphorus loading and concentrations draining out of the wetland are substantially higher than the observed loading and concentrations entering the wetland (Table 9). Unfortunately, the wetland potentially off-sets any nutrient removal benefits that the three-cell NURP pond may provide. Based on the morphological characteristics of the wetland, the model suggests that the wetland should provide an additional 40% removal efficiency for total phosphorus, 38% removal efficiency for total nitrogen, and 77% removal efficiency for total suspended solids (Table 10). Consequently, the model indicates that the wetland appears to have the potential to significantly reduce the amount of nutrient loading. This is contradictory to the observed monitoring data that was collected for the wetland. The disparity between observed and modeled conditions indicates that preliminary modeling effort may not be suitable to adequately determine the impacts alternative best management practices may have on the proposed change in land use. It might be necessary to monitor existing conditions prior to selecting best management practices to adequately reduce nutrient loading and run-off volume.

A stormwater treatment train composed of a three-cell detention pond and a wetland at Bass Creek Business Park in City of Plymouth, Minnesota, was monitored during 2004-2005 season. The P8 model was calibrated using the flow volumes and nutrient loadings obtained from the monitoring program and used to simulate the performances of different pond configurations under the same condition of runoff. The runoff volume and nutrient removal efficiency of the three-cell pond simulated by the P8 model were well matched with measured data. The simulation results suggested that multiple-cell pond configuration can provide higher removal efficiency in nutrients and suspended solids than can single pond configuration with similar morphological conditions. The P8 model was a useful tool to determine the design configuration of a detention pond to maximize the pollutant removal efficiency for a given site and weather conditions.

The overall efficiency of the treatment train including the wetland was also simulated and compared to the measured data. The simulated nitrogen and phosphorous concentrations and loadings discharged from the wetland were significantly lower than the measured data, overestimating the performance of the wetland at removing nutrients. Monitoring data showed a negative pollutant removal efficiency of the wetland, suggesting that the wetland provides a primary source of nutrient to the receiving water body (i.e., Pike Lake). Because the pollutant removal mechanism in a wetland could not effectively be simulated simply using the sedimentation theory adapted by P8 model, it might be also necessary to monitor existing conditions prior to selecting best management practices to adequately reduce nutrient loading and run-off volume.