Process: Soil erosion is a natural process that plays an important role in the dynamics of landscape features at large geologic time scales. When considering stormwater treatment practices, interest primarily lies in accelerated erosion as a result of human-related activities. Sediment is the largest, by mass, pollutant in our waterways. In addition, soil particles can adsorb other contaminants such as phosphorus and metals, thereby providing a mode of transport. Stormwater treatment practices for reducing the impact of these contaminants are often the same practices used to control erosion and sediment transport. Movement of soil particles into water bodies is a two-step process. First, the soil particles are detached from the ground surface. These detached particles are then transported from their original location to a water body. Reduction in the rate of either of these two steps can limit the sediment transported by runoff.

Soil detachment occurs by raindrop impact or by forces associated with surface runoff. Detachment potential of rainfall is dependent on the size and number of raindrops, both of which increase with storm intensity. Raindrops typically fall uniformly over a bare hill slope, and therefore the corresponding potential detachment is roughly equal at all points (for small areas). Erosion for this situation is often referred to as sheet erosion because soil is removed from the area as a mostly uniform sheet. Soil detachment also occurs when the shear forces of surface runoff exceed the gravity and cohesive forces of the particles. Detachment by surface runoff is not uniform over the surface, resulting in channels carved into the landscape. Small channels are called rills, and the corresponding erosion is called rill erosion. Erosion by detachment in rills is usually greater than erosion by raindrop impact. Occasionally, the detachment by surface runoff can result in unsightly gullies and corresponding large sediment losses.

After detachment, soil particles are delivered to water bodies and transported as suspended solids or as “bed load,” which is sediment that moves with the flow but has frequent contact with the bed. Although raindrop splash moves some particles, the vast majority of sediment transport occurs by particles entrained in surface runoff. Sediment transport is primarily dependent on the weight of particles and velocity of runoff. Sediment is often deposited in the landscape at locations where localized conditions reduce the transport capacity of runoff. Deposition then occurs if the sediment load in the flow is greater than the reduced transport capacity. This process is common at the toe of hill slopes where a change in slope corresponds to a reduction in transport capacity. The difference between eroded particle mass and deposition is called sediment yield. The ratio between sediment yield and eroded mass is called the sediment delivery ratio.

Assessment considerations: Five major factors impact erosion in urban areas: (1) erosivity of rainfall, (2) soil erodibility, (3) slope length, (4) slope steepness, and (5) land cover. These factors are multiplicative in the framework of the Universal Soil Loss Equation (Wischmeier and Smith 1978). Rainfall erosivity is generally not a controllable factor, and site conditions often limit flexibility in reducing erosion losses by manipulating the slope length and steepness. A large soil erodibility is roughly 5 times greater than a small erodibility. Although the range in this factor is significant, the land-cover factor varies by a magnitude of 1000. An effective practice for controlling erosion is maintaining sufficient land cover. Vegetative cover, mulches, and erosion control blankets are effective in reducing soil erosion. One major assessment issue is evaluation of both the installation and the maintenance of erosion controls at construction sites.

A second major assessment issue is particle size distribution of eroded sediment. Large-sized particles are easier to trap with gravitational settling practices (see Stokes' Law, equation 2.2). Clay particles are chemically more active and therefore more likely to bond with land-applied chemicals. They also settle so slowly that is difficult to remove them by sedimentation. Soil can be eroded as water-stable aggregates composed mostly of clay particles. These aggregates can be large enough to be retained by sedimentation practices, which would not retain the individual clay particles. Standard particle size analyses use a dispersion agent to break down aggregates to determine the individual particle sizes. Because aggregates are important in the performance of sedimentation practices, it is important that a dispersion agent not be used in determining the particle size distribution of sediment.

Process: Filtration is the retention of suspended particles while water is passing through granular media. The main mechanism of filtration is straining, in which suspended solids are trapped between media particles. Filtration removes suspended solids and sediment-bound pollutants from solution, but allows them to accumulate in the filter. Filtered material eventually clogs filters, reducing the flow rate through the filter. For this reason, sediment must eventually be removed by backwashing, surface scraping, or media replacement.

Assessment considerations: Filtration efficiency is generally expressed as the ratio of concentration of contaminant in the stormwater runoff at the top of the filter bed (Co) to the concentration at the bottom (C). Filtration efficiency is strongly dependent on particle size and filter media. Filtration is generally limited by clogging of the filter, which can be measured by the drop in head loss across the filter, a reduction in filtration rate, or an increase in the time required to filter a certain volume of runoff.

Process: Sedimentation of particles is an important pollutant retention process in many stormwater treatment practices. In theory, the sedimentation rate (i.e., particle settling velocity) of small particles under quiescent conditions is predicted by Stokes' Law as given by equation 2.2. 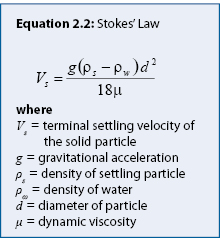 A relationship for settling velocity that incorporates larger particles, such as sands, has been developed by Ferguson and Church (2004) as shown in equation 2.3. This equation becomes Stokes' Law at small particle diameters and results in a constant drag coefficient for large particle diameters. 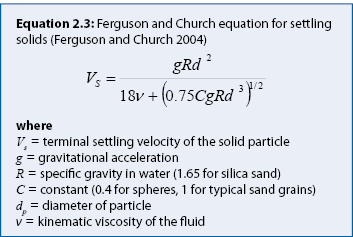 Assessment considerations: Equation 2.2 illustrates several variables that affect settling. Sedimentation rate increases as the density and size of particles increase. For a given particle type, settling velocity (Vs) also depends on the properties of water. The net effect of rising temperature is faster sedimentation, because the effect of decreasing viscosity is greater than that of decreasing density. From 0 °C to 30 °C (32 °F to 86 °F), the settling velocity of fine silt (0.02 mm diameter, 7.87 x 10-4 inches) approximately doubles (figure 2.2). Salinity also affects Vs, but the effect is minor even at the largest levels expected with road salt (~20,000 mg/L). 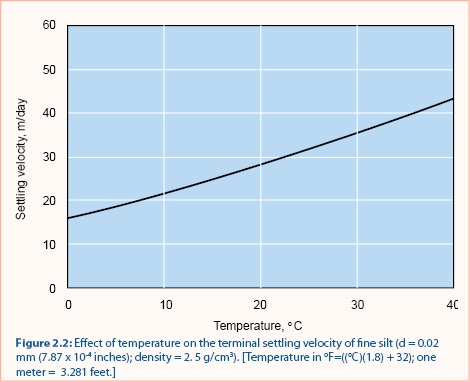 The implication of this for the Upper Midwest States is that retention of inorganic suspended solids in stormwater treatment practices that rely on sedimentation will be smaller in spring and fall than during the summer. During warmer weather, algae growing in wet ponds would have much smaller sedimentation rates because they have much smaller density than inorganic particles, and some species can regulate their buoyancy. Solids removal will occur more quickly with a concentration profile that increases with depth. This occurs at the large Vs and the minimal mixing level, indicated by bottom shear velocity, u*. 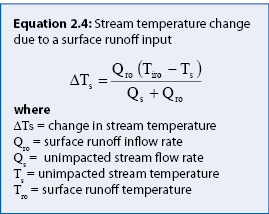 The temperature of land surfaces is controlled by several processes: solar radiation during the daytime, atmospheric long wave radiation, long wave back radiation from the surface, evaporative heat flux, and sensible heat flux. Land surfaces are heated above ambient air temperature primarily by solar radiation. Asphalt and roof surfaces in Minnesota reach daily maximum temperatures that average 50 °C (122 °F) in July, while concrete reaches an average of 46 °C (115 °F) in July (Herb et al. 2007b). Soil evaporation keeps bare soil surfaces somewhat cooler, with average July maximum temperatures of about 34 °C (93 °F). Vegetated land surfaces are cooler due to evaporation and the shading effect of vegetation, averaging about 24 °C (75 °F) in July. Figure 2.3 is an illustration of the simulated average weekly surface temperature of five types of land uses in St. Paul, Minnesota, from April to November of 2004, where asphalt weekly surface temperatures are about 18 °C (64 °F) warmer than grasslands or vegetated ponds in mid-summer months.

Land surfaces that are warmed by solar radiation will cool prior to and during storm events, with the amount of cooling depending on the surface properties and the amount of cloud cover prior to the onset of rainfall. Pavement has relatively large thermal mass, and therefore cools off more slowly, while asphalt shingle rooftops cool very quickly, and typically reach ambient air temperature by the start of a storm (Janke et al. 2009). Storms with a rapid onset of cloud cover and rainfall after bright sun give less time for land surfaces to cool off, which leads to greater land temperatures at the onset of rainfall and greater runoff temperatures.

Mitigation Practices: Wet detention ponds are often built as mitigation measures to lower the peak flow during storms and to remove the pollutants from storm runoff. However, water stored in wet detention ponds is heated during hot summer days, and as stormwater enters the pond, the heated surface water is displaced. The temperature of water stored in wet detention basins is often warmer than that of streams, so that wet pond effluent becomes a thermal pollution point source for nearby streams. On average, wet pond effluent was found to be 1.8ºC (3 °F) greater in temperature than untreated runoff from a parking lot for a site in Woodbury, MN (Herb et al. 2009). However, increases in temperature caused by a wet pond are offset by reductions in peak flow rate. Compared to unmitigated runoff from pavement, wet pond mitigation practices tend to reduce the magnitude, but increase the duration of, stream temperature impacts due to stormwater (Herb et al. 2009).

Infiltration practices are very effective for mitigation of thermal pollution, because warm surface runoff is cooled as it passes through soil and mixes with shallow groundwater. Although infiltrating water may locally increase shallow groundwater temperatures, there is little evidence that an infiltration pond with a reasonable buffer distance (40-50 m) can measurably impact the temperature of a stream. For storms that exceed the infiltration capacity, infiltration practices may still be of substantial benefit in reducing thermal loading because some of the initial, largest temperature runoff may be absorbed into the soil.

Wetlands with substantial shading from emergent vegetation can provide some thermal mitigation capacity, since shaded standing water will be substantially cooler than open water (Herb et al. 2007c). However, it is difficult to quantify possible thermal loading reductions for wetlands, because it depends on both the hydraulic characteristics of the wetland and the level of surface shading that is achieved. As with other pollution removal application of wetlands, any hydraulic short circuiting will reduce the thermal mitigation effectiveness of a wetland (Herb et al. 2007c).

Assessment considerations: Urbanization not only increases the volume and peak storm runoff, but also redistributes surface and subsurface flows, resulting in more overland runoff and less infiltration. Overland runoff from impervious surfaces is also warmer than overland runoff from vegetated surfaces. Coldwater streams are fed primarily by groundwater, which is generally cooler than summer runoff in this region. Any reduction in infiltration in upland areas caused by impervious surfaces or degraded infiltration practices will likely reduce base flow to the receiving stream during dry periods, which may result in elevated temperatures during hot summer days. Overland runoff that has been warmed by impervious surfaces (see discussion above) may further increase stream temperatures during summer rain events. Quantifying the long-term impact of a single small urban development on the base flow of the receiving stream may be quite difficult. However, the cumulative impact of numerous developments or of an extensive urbanization program on the base flow of the receiving stream can be assessed using mathematical models.