This appendix discusses and demonstrates the importance of suspended sediment particle size distributions on the removal effectiveness of sedimentation practices. 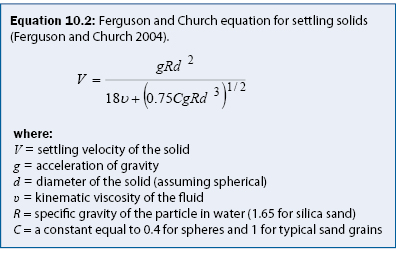 The equation considers particle shape and roughness in the calculation of settling velocity. For the purposes of this analysis the particles are assumed to be naturally rough and characterized by sieve diameters. The specific gravity for both distributions is assumed to be 2.5. The two distributions are compared in Figure 1. The impacts of settling velocity distribution on the required sedimentation practice size, suspended solids removal, adsorbed heavy metal removal, and costs for the two distributions are discussed herein.

Detention ponds are a commonly used stormwater treatment practice that depend almost entirely on sedimentation for solids and pollutant removal. Therefore, percent removal in settling ponds is a function of pond size, detention time, and mixing conditions. For this analysis, detention time is calculated as the pond volume (ft3) divided by inflow (ft3/s). Inflow is assumed to be the peak flow rate generated by 0.0604 in./hr of rain falling on a completely impervious surface, which represents the 3-month, 24-hour storm for Minneapolis, MN (Huff and Angel, 1992). To model removal performance, fully mixed and fully quiescent (i.e. plug flow) operating conditions are assumed and represent the minimum and maximum percent removal, respectively. Equations for percent removal in ponds with constant cross-sectional area are presented for fully mixed conditions (Equation 1) and for fully quiescent conditions (Equation 2).

Hydrodynamic separators are also available for stormwater treatment and the University of Minnesota has analyzed many such devices to determine the percent removal as a function of flow and particle settling velocity. Wilson et al. (2008) developed a convenient equation for removal efficiency shown in Equation 4.

The calculations herein analyze a specifically sized hydrodynamic separator with a maximum flow of 1.5 cfs and the following empirical coefficients: R = 0.98, b = 2.28, a = 0.70. Other devices will have a different result.

Metals in stormwater runoff typically adsorb to sediment with smaller sediment often adsorbing more metals (expressed as mass of metals per mass of sediment) than larger particles presumably due to their larger surface area per unit mass. Also, due to larger settling velocities, a larger fraction of larger sediment is retained by the sedimentation practice. Therefore the fraction of heavy metal removed is typically less than the fraction of sediment removed. In this analysis the fraction of heavy metals removed was estimated assuming average concentrations of adsorbed metals as found by Sansalone and Buchberger (1997) and shown in Table 1. It should be noted that cadmium does not follow the trend of adsorbing in greater amounts to smaller particles.

The percent solids removal with varying pond size for the NURP distribution and the Sansalone et al. (1998) distribution is shown in Figure 2. Pond area is characterized by percent of the impervious watershed area. The percent solids removal for different inflows for a specifically sized proprietary device is shown in Figure 3.

Assuming the Sansalone et al. (1997) distribution of heavy metals, the percent of adsorbed zinc, copper, lead, and cadmium removed for a detention pond with an area equal to 0.01 percent of the total watershed impervious surface is shown in Table 2. The metals removal for a hydrodynamic separator operating at 50 percent of the maximum design flow is also shown in Table 2. The removals are quantified for only the Sansalone et al. (1998) distribution.

Two primary conclusions can be drawn from this analysis. First, if a pond is sized assuming the NURP settling velocities but the actual distribution from the watershed is coarser with a greater settling velocity, the pond will remove a higher percentage of solids than expected. As a result, the actual downstream solids concentration will be smaller, the effluent solids load will be smaller, and the solids collection within the pond will be greater (i.e., more frequent maintenance may be required) than expected. Similarly, the hydrodynamic separator provided minimal treatment (e.g., 20-40%) for fine PSD such as the NURP distribution, but may remove over 90 percent of total solids of a coarser PSD (e.g., Sansalone et al. (1998) distribution).

Second, a pond designed for a specific solids removal (e.g., 80% TSS) will require a smaller surface area for a relatively coarse PSD as compared to the NURP distribution. For example, the area for a pond to achieve 80 percent removal is approximately 2-4% of the watershed area assuming a NURP distribution and approximately 0.001 percent assuming the Sansalone et al. (1998) distribution. In addition to the smaller area, ponds designed assuming a relatively coarse PSD will also cost less to construct.

Although the NURP settling velocity distribution may not accurately characterize the particles in some locations, it does provide a conservative estimate for stormwater treatment practice design. If the assumed PSD is coarser than the actual distribution, the sedimentation practice will remove fewer solids than expected. Additionally, many recent PSDs have been characterized using mechanical sieving and sophisticated particle sizing instruments. These calculations did not consider variations in particle density or particle shape, which will not have a major impact unless organic compounds are being considered.

The results of this paper only compare two distributions, but particle size distribution in stormwater runoff depends on many factors. For example, PSD will vary with site location (spatially), with rainfall intensity (hydrologically), and with season or antecedent dry period (temporally). Upstream treatment devices and conveyance systems also have an impact on the PSD leaving a watershed. The distribution characterized by Sansalone et al. (1998) collected runoff directly from a roadway surface, and the PSD would likely be different if the runoff were routed through pipes or upstream treatment devices. As a result, the sediment settling velocity distribution of urban stormwater runoff should be determined for different sites under different storm conditions to ensure the most accurate design.