Urban stormwater is responsible for about 15% of impaired river miles in the United States (U.S. EPA 2000). Stormwater impacts can be hydrologic, chemical, biological, or physical but the impacts of greatest concern are sediment and habitat alteration, nutrients, toxic substances, chloride, bacteria, temperature, oxygen-demanding substances, and biological integrity (U.S. EPA 1992).

Urbanization, as reflected by increased impervious surface, alters watershed hydrology in several ways. One such way is an increase in the runoff coefficient (inches of runoff/inches of rainfall) as the percentage of impervious surface in the watershed increases as shown in Figure 2.1 for sites studied in EPA’s National Urban Runoff Study (U.S. EPA, 1983). Increasing imperviousness also leads to hydrographs with shorter durations and greater peak flows, larger flood flows and smaller base flows (Paul and Meyer 2001). Some of the effects of altered flow on biota include: larger peak temperatures, altered sediment discharge, unstable channels, fewer pools, and degraded habitat due to channelization. Evaluations of stream habitats indicate that flow and channel alteration are major contributors to the observed decline in biological integrity often associated with increased imperviousness (see reviews by Paul and Meyer 2001, Pitt 2002, Booth et al. 2002, and Scheuler 2000a). 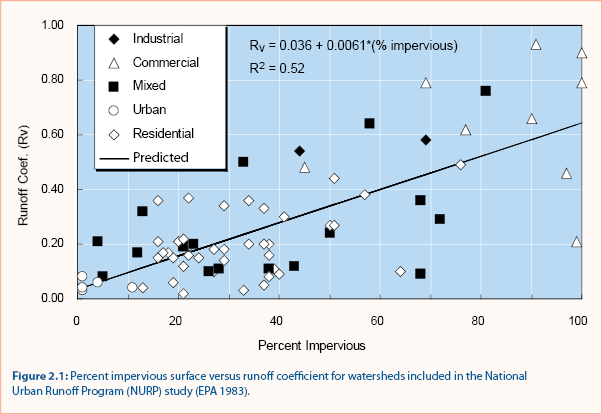 Nutrients, primarily phosphorus and nitrogen, increase plant growth in streams and lakes. In many parts of the country, stormwater containing a large concentration of nutrients enters lakes causing nutrient enrichment (i.e., eutrophication), reduced water clarity, increased presence of undesirable blue-green algae. This makes treatment for drinking water more difficult and expensive. Because of urban sprawl, residential land is now the dominant land use in 64% of the nation’s water supply reservoirs (Robbins et al. 1991). Eutrophication caused by nutrients in stormwater often impairs municipal drinking water supplies. An excellent example is the Vadnais chain of lakes that supplies water to the city of St. Paul, Minnesota, which for many years has experienced serious taste and odor problems, in part because much of its watershed is residential land that contributes significant quantities of phosphorus (Walker 2000). Nutrients can also stimulate the growth of undesirable rooted aquatic plants in streams.

A large number of potentially toxic substances occur in stormwater. Several metals, including copper, zinc, and lead, are ubiquitous in urban stormwater. Lead concentration in the environment has declined since the 1970s, when lead in gasoline and paint was banned. Note the smaller lead concentration in the three more recent stormwater studies in table 2.2 as compared with those in the NURP study (U.S. EPA 1983). There is little evidence of short-term toxicity of urban stormwater, but considerable evidence of long-term toxic effects from exposure of organisms to contaminated sediments (Pitt 2002).

Chloride as a result of road deicing is an emerging urban pollutant (Novotny et al. 2009). The chloride concentration in streams has been directly correlated with the percent of impervious surface (Kaushal et al. 2005) and sale of rock salt purchases (Novotny et al. 2008). Peak chloride concentrations in urban streams during winter can be several thousand mg/L. For comparison, Minnesota has a maximum (acute) standard of 860 mg/L not to last more than one hour for cold water (Class 2A) streams and a chronic (four day average) standard of 230 mg/L (MPCA 2003).

The potential for bacterial contamination is generally indicated by coliform counts. Minnesota’s standards are based on fecal coliforms (MPCA 2003). Although most fecal coliforms are not pathogenic, they are indicative of human pathogens. In one study, the number of gastrointestinal diseases per 1000 swimmers was shown to increase linearly with coliform counts (Durfour 1984, cited in Wenck 2003). One outcome of elevated coliform levels is beach closings. In Minneapolis, there were 11 beach closings in 2001 and 10 in 2002. Fecal coliform concentrations are generally greatest just after rainstorms. A study of Minnehaha Creek (Wenck 2003) reported that fecal coliforms > 2000 CFU/100 mL were found only within three days of a rainstorm. This indicates that a large percentage of fecal coliforms are a result of stormwater runoff.

Urbanization generally requires removing crops, trees, and native plants from parcels of land and replacing them with roads, parking lots, lawns, and buildings. These changes in land use affect hydrology (i.e., volume and peak runoff), riparian shading, and heating of runoff in these areas, which results in increases in summertime temperatures of nearby streams. This can significantly impact trout streams that are fed by relatively cool groundwater because increases in the volume and temperature of runoff from impervious surfaces will dilute the colder groundwater and threaten the trout habitat.

Degradable organic matter in streams utilizes oxygen, often rapidly enough to reduce the dissolved oxygen concentration such as to impair aquatic life. Unlike point source discharges which cause the most severe oxygen depletion during small-flow conditions, reduced oxygen concentration due to stormwater in urban streams often occurs just after major storms, which carry oxygen-demanding substances into streams.

Continue to Stormwater Treatment Processes or click here for a list of references for the previous sections. If you would like to know about the editors, funding, contributing authors, and review board for this manual, please continue to About this Manual.