Chemical precipitation and adsorption cause soluble constituents to become incorporated into particles. Both result in soluble constituents becoming part of solid particles. It is also possible that constituents associated with particles may de-sorb or dissolve (from precipitated particles) back into soluble forms. These processes are important for metals, phosphate, and salt, although each of these pollutants requires a slightly different assessment approach. The discussion below applies to the condition of equilibrium. These processes are not always at equilibrium, but describing non-equilibrium processes is beyond the scope of this manual. 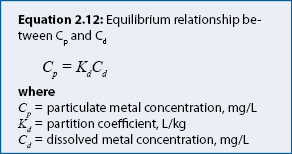 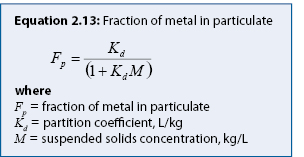 For several metals (copper, zinc, cadmium, chromium, lead, and nickel) Kd values are typically 10-4 to 10-5 L/kg (Thomann and Mueller 1987). The relationship between particulate (bound) and soluble metals is shown in figure 2.5. Note that when the suspended solids concentration is small, most metals are in the dissolved fraction. When the suspended solids concentration increases beyond ~ 500 mg/L, nearly all metals are in the particulate fraction. 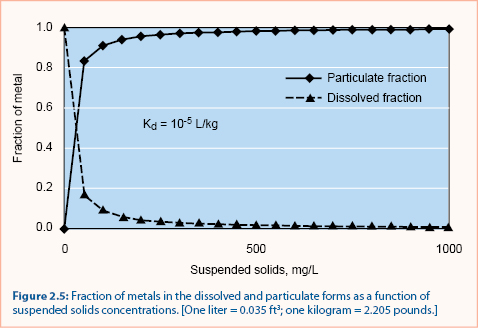 Assessment considerations: Assessment of metal retention in stormwater treatment practices would generally be done empirically, by measuring input and output fluxes of metals. In cases where greater metal retention is needed, it may be practical to examine partitioning between metals and sediment and sediment retention to determine whether the limiting factor is sedimentation rate or fractionation. For example, metals may be difficult to remove from stormwater with a small suspended solids concentration because the dissolved fraction would be large. Metal retention from stormwater results in metal accumulation in sediment.

The metal content of sediments may dictate ultimate disposal of sediments (Polta 2001, 2006). Metals concentrations in sediments of stormwater ponds in the Twin Cities were generally below levels that would require hazardous waste disposal, but copper and iron in pond sediments were often greater than Soil Reference Values for human exposure (Polta 2006). Metal accumulation per kilogram of soil may be greater in infiltration basins than in sedimentation ponds because soluble metals are adsorbed or precipitated as water infiltrates through soils.

Assessment considerations: When phosphate retention by soil adsorption is important, the buildup of soil P should be assessed periodically. This can be done with measurements of extractable P using the Bray or Olsen methods.

Process: Sodium undergoes ion exchange with other cations (positively charged ions) adsorbed on soil particles, such as calcium (Ca2+) and magnesium (Mg2+). When sodium concentrations in stormwater are very large (e.g., road salt contamination), sodium displaces other cations. This causes clay particles to flocculate, which reduces infiltration in soils with moderate to large clay content. The amount of sodium adsorbed relative to other cations is called the sodium exchange fraction. This is the fraction of all adsorption sites that are occupied by sodium. Reduced infiltration occurs when the sodium exchange fraction exceeds 15%.

Assessment considerations: The extent of sodium adsorption by soils is measured by the sodium exchange fraction. This is the fraction of total ion exchange sites that are occupied by sodium. Values greater than 15% are considered undesirable for vegetation. Because most waters in Minnesota have minimal salinity, sodification (buildup of soil sodium) would most likely only occur in sites receiving drainage of road salt. This may include some rain gardens (those receiving runoff from streets) and infiltration basins.

Continue to Developing an Assessment Program or click here for a list of references for the previous sections.