The procedure for capacity testing (level 2) varies for each stormwater treatment practice and assessment goal. Therefore, the reader should consider the recommendations located in each of the Filtration, Infiltration, Sedimentation, and Biologically Enhanced Practices sections of this manual. As with any field work, safety is an important concern and should be addressed when conducting capacity testing. 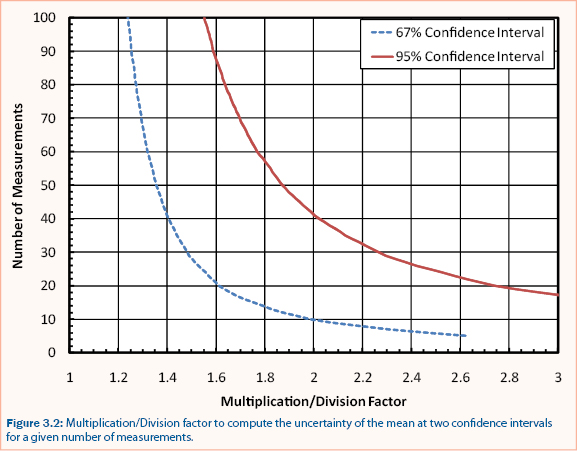 Measurement uncertainty can be expressed by the confidence interval which represents the range within which the actual mean will be included based on a number of samples for a given level of confidence (e.g., 95%). Confidence intervals for normally distributed populations can be calculated from equation 7.17 (repeated here) if the standard deviation, number of samples, and Student (Gosset) t value is known. 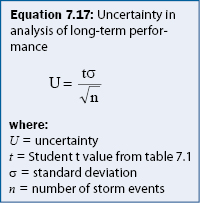 To simplify application of equation 7.17 to infiltration capacity testing, the standard deviation of saturated hydraulic conductivity can be estimated from measurements. Saturated hydraulic conductivity was measured in 178 locations within various rain gardens throughout the Minneapolis/St. Paul metropolitan area (Asleson et al. 2009). The measurements were assumed to be log-normally distributed.

This relationship can be used to determine the uncertainty that will result from a given number of hydraulic conductivity measurements as follows: 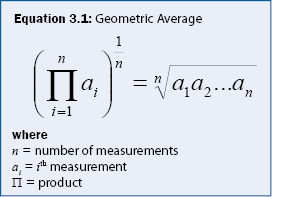 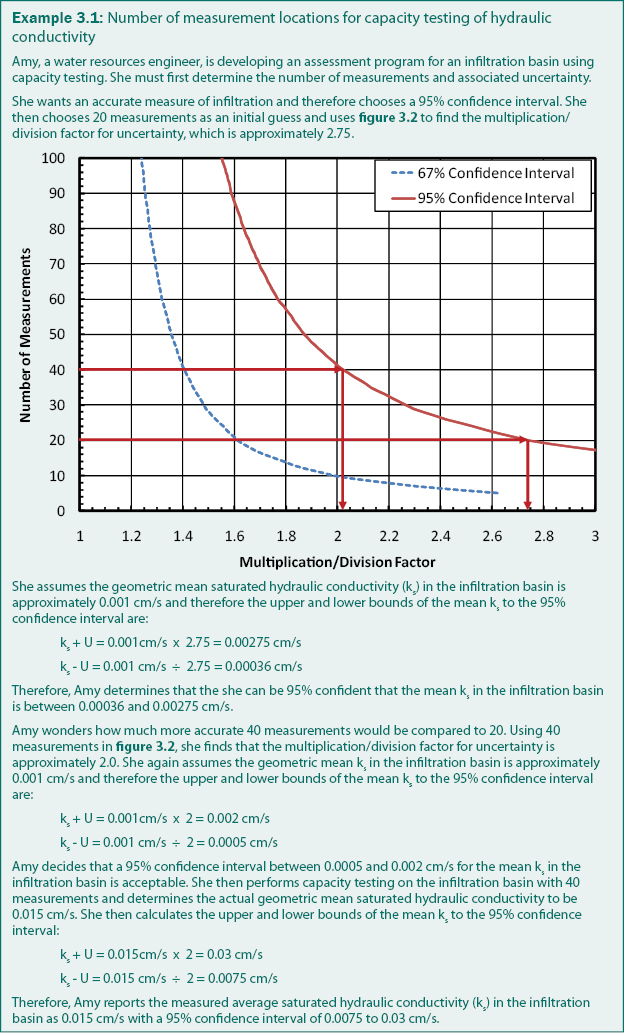 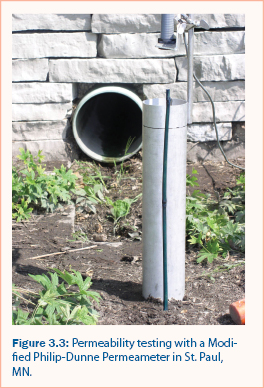 Sediment accumulation tests estimate the sediment accumulated in a stormwater treatment practice. Using surveying equipment or GPS units, sediment surface elevation measurements are taken throughout the stormwater treatment practice and the data are entered into three-dimensional drafting software (e.g., AutoCAD, Microstation). For manholes or proprietary devices, only a few measurements may be required because the area is small. The data can then be compared to similar data of initial surface elevation measurements to determine the amount of sediment that has accumulated. The amount of accumulated sediment can then be compared to the design sediment storage volume to determine the available capacity for additional sediment capture. Sediment accumulation tests therefore require as-built plans or topographical data obtained as recently after construction as possible to determine the initial surface elevation. The rate of sediment accumulation can also be calculated for a given time period using equation 3.2. 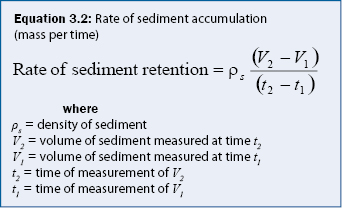 Testing conducted annually can be used to estimate the sediment accumulation rate with respect to time (e.g., lbs/year). Sediment accumulation testing cannot be used, however, to assess pollutant removal efficiency because it only measures the amount of sediment captured and does not measure the amount of sediment entering and exiting a stormwater treatment practice. Therefore, if the assessment goals include pollutant removal efficiency, synthetic runoff testing (level 3) or monitoring (level 4) must be considered.