Bioretention practices (also called rain gardens) are low-lying areas, natural or excavated, that are planted with vegetation and receive stormwater runoff from nearby impervious surfaces via stormwater conveyances, such as curb cuts, as shown in figures 11.1, 11.2 and 11.3. The collected stormwater typically exits the rain garden primarily via infiltration, reducing runoff volume, and recharging groundwater. For a discussion on possible groundwater contamination due to infiltration of stormwater see Infiltration Practices. 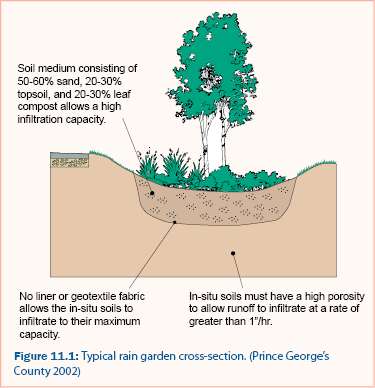 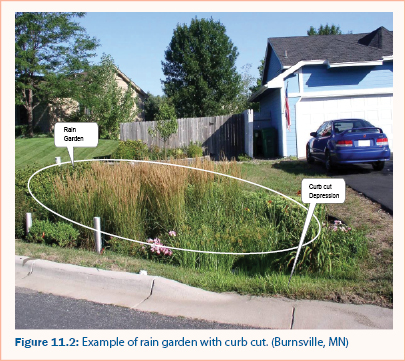 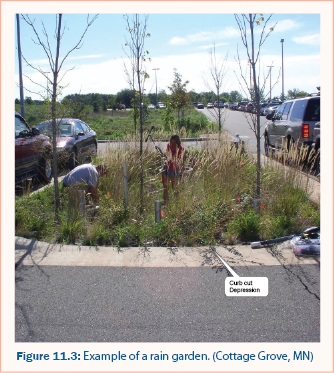 If the infiltration rate into the surrounding ground is insufficient or if infiltration is not desired, the rain gardens are equipped with underdrains that remove the excess water. Such rain gardens are constructed by excavating the soil, placing a drain tile or perforated pipe collection system at the bottom, backfilling with high hydraulic conductivity soil, and then planting with vegetation (figure 11.4). In rain gardens with underdrains, the soil-filtered water captured by the drain tile or perforated pipe collection system is then delivered to receiving waters. 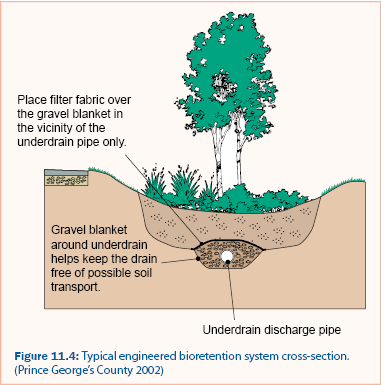 Rain garden vegetation is selected to tolerate intermittent submergence and to be aesthetically pleasing. In EPA Region 5 (Illinois, Indiana, Michigan, Minnesota, Ohio, and Wisconsin), most rain gardens will typically contain vegetation listed in the publication “Plants for Stormwater Design: Species Selection for the Upper Midwest” (Shaw and Schmidt 2003). For more detailed information on bioretention practices and variations in design, see the Minnesota Stormwater Manual or the Prince George’s County Bioretention Manual.

Wetlands are lowland areas where the groundwater level is higher than the ground surface elevation such that persistent shallow pools are present. Constructed wetlands are designed to mimic natural wetlands. Shallow pools, vegetation, and microorganisms remove pollutants from stormwater runoff through sedimentation, filtration, and biodegradation, respectively. Plants can also take up pollutants such as nutrients and store them in the wetland by converting them to plant biomass. Constructed wetlands are typically designed with a surface area of 3 to 5 % of the watershed impervious area (U.S. EPA. 1999).

Constructed wetlands reduce runoff peak flow by temporarily storing stormwater runoff. Runoff volume is reduced by evapotranspiration, but due to the high water table, infiltration is usually not significant. On average (± 67% confidence interval), constructed wetlands in the United States retain 68% (± 25%) of total suspended solids and 42% (± 26%) of total phosphorus (Weiss et al. 2007). These average values fall within the ranges reported by the U.S. EPA. (1999) of 50%–80% for total suspended solids and 15%–45% for total phosphorus.

Filter strips, also called buffer strips or buffers, are vegetated areas specifically designed and positioned for overland sheet flow. Overland sheet flow occurs when stormwater flows on the land surface in a thin layer with a slow velocity. The vegetation filters solids and reduces runoff velocities, which allows for more infiltration to occur. Sheet flow is required for filter strips to effectively treat stormwater runoff. See the Minnesota Stormwater Manual for guidance on design and installation of filter strips.

Swales are vegetated canals or trenches used to convey stormwater runoff, which allow solids to settle while also filtering suspended solids with vegetation. During conveyance, infiltration into the swale sides and bottom may occur. Swales may also be called ditches, grassed channels, dry swales, vegetated swales, wet swales, biofilters, or bioswales. Permeable structures (e.g., check dams) are sometimes installed in swales to reduce flow velocities, which increases settling and filtration by vegetation. Grassed swales are typically designed with a surface area of 10 to 20% of the watershed impervious area (U.S. EPA 1999). Refer to the Minnesota Stormwater Manual for guidance on the sizing of filter strips and the design and installation of swales. 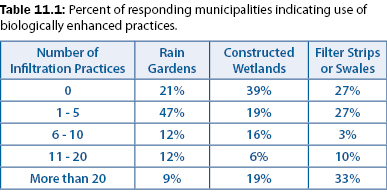