Infiltration practices operate by capturing and temporarily storing stormwater, before allowing it to infiltrate into the underlying soil. The infiltrated water is then partitioned into groundwater recharge, discharge through an underdrain (if applicable), and transpiration. By performing this process, these practices provide two fundamental functions in stormwater management: attenuation of runoff volume and treatment of the runoff. These functions may ultimately reduce stormwater pollutants, increase groundwater recharge, decrease runoff peak flow rates, and decrease the volume of stormwater runoff.

Infiltration rates in infiltration basins and trenches need to be small enough to promote the retention and treatment of pollutants and nutrients, while large enough to avoid prolonged periods of ponded water and the development of anaerobic conditions. The Minnesota Stormwater Manual states that soil permeabilities must be at least 0.2 inches (1.27 centimeters) per hour and, according to the Wisconsin Stormwater Manual (broken link) at most 5.0 inches (12.7 centimeters) per hour. This typically limits application to some but not all soils in Hydrologic Soil Groups A, B, and C (Minnesota Stormwater Manual). Soil infiltration rates can initially be estimated from National Resources Conservation Service (NRCS) soil data but should be confirmed by an on-site geotechnical investigation. For guidance on investigation procedures, see Chapter 12 of the Minnesota Stormwater Manual.

Fate of contaminants after infiltration

Much of the metal contaminant load in stormwater runoff is bound to solid particles and is removed through sedimentation or physical straining. The literature, as summarized by Weiss and LeFevre (2008), indicate that infiltrated dissolved metals are typically adsorbed in the upper layer of soil (50 cm or less) but due to the limited adsorption capacity of the soil, breakthrough may eventually occur. To prevent breakthrough, replacement of the upper soil layers may be necessary every 3 to 5 years, but some studies have shown the frequency may be much less often than 5 years (Weiss and LeFevre 2008).

Hydrocarbons are also removed in the top layers of soil, especially by mulch that, because of its large lignin content, has a strong affinity for nonionic organic compounds. Dissolved phosphorus can sometimes be removed by soil after infiltration occurs, but it is not uncommon for studies to find a negative phosphorus removal rate (i.e. an increase in infiltrated runoff phosphorus concentration) in some infiltration systems (Weiss and LeFevre 2008).

The U.S. EPA (1999a) reports that infiltration trenches typically occupy 2-3% of the total impervious area within the watershed, while Claytor and Schueler (1996) report infiltration practices typically occupy 2-3% of the total watershed area. Many studies have documented the effectiveness of pollutant removal in properly functioning infiltration practices (Schueler 1987, Schueler 1992, U.S. EPA 2000, Winer 2000). Pollutant removal efficiencies from three of these studies are shown in table 9.1.

An infiltration basin is a natural or constructed impoundment that captures, temporarily stores, and infiltrates the design volume within an acceptable time period. Infiltration basins often contain a flat, densely vegetated floor situated over naturally permeable soils. Nutrients and pollutants are removed from the infiltrated stormwater through chemical, biological, and physical processes. Infiltration basins are well suited for drainage areas of 5 to 50 acres (2.03–20.25 hectares) with land slopes that are less than 20 percent, with typical depths in the basin ranging from 2 to 12 feet (0.61–3.66 meters) (Minnesota Stormwater Manual). A typical infiltration basin is shown in figure 9.2. 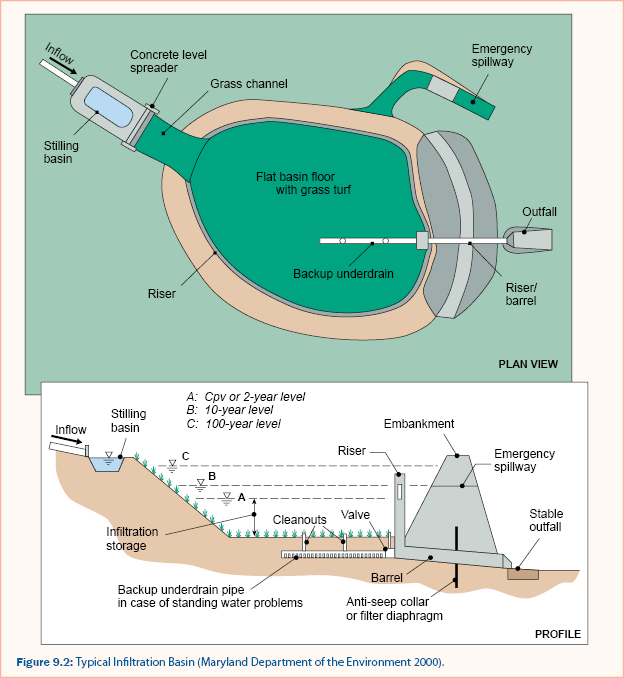 An infiltration trench is a shallow excavated trench, typically 3 to 12 feet deep (0.91–3.66 meters), that is typically backfilled with a coarse stone aggregate allowing for the temporary storage of runoff in the void space of the material. Discharge of the stored runoff occurs through infiltration into the surrounding naturally permeable soil. Infiltration trenches are well suited for drainage areas of 5 acres (2.03 hectares) or less (Minnesota Stormwater Manual). A typical infiltration trench is shown in figure 9.3. 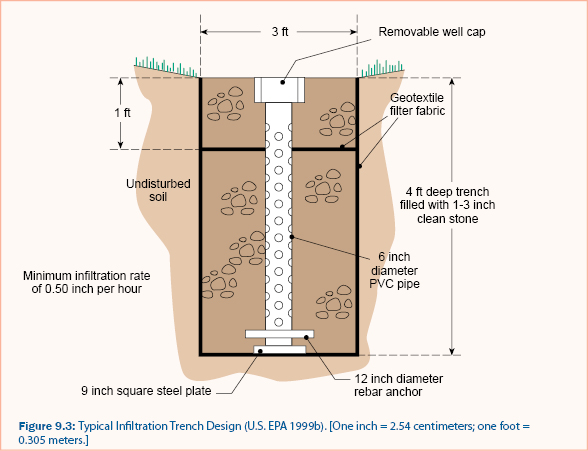 While most would consider permeable pavements to be composed of either asphalt or concrete materials, there are actually nine categories of materials that fall within the definition of permeable (or porous) pavement (Ferguson 2005). These include permeable aggregate, permeable turf, plastic geocells, open-jointed paving blocks, open-celled paving grids, permeable concrete, permeable asphalt, soft permeable surfacing, and decks.

For the case where the permeable pavement is either asphalt or concrete, the pavement system is designed so that stormwater infiltrates through the permeable upper pavement layer and then into a reservoir of stone or rock below. Water from the reservoir then either percolates into the underlying soil, eventually recharging groundwater, or is collected by a perforated pipe underdrain system and carried to a surface discharge location. An illustration of a vertical section through an asphalt permeable pavement is presented in figure 9.4. 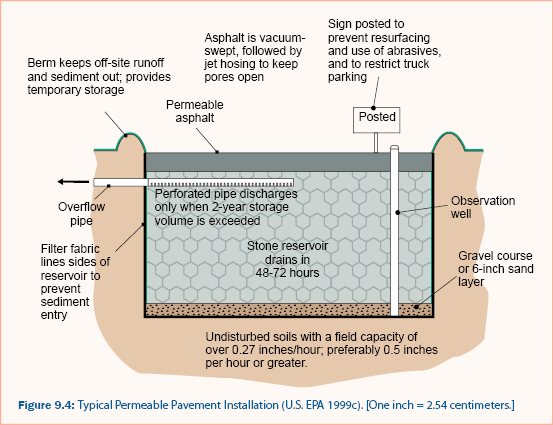 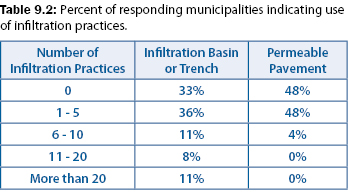 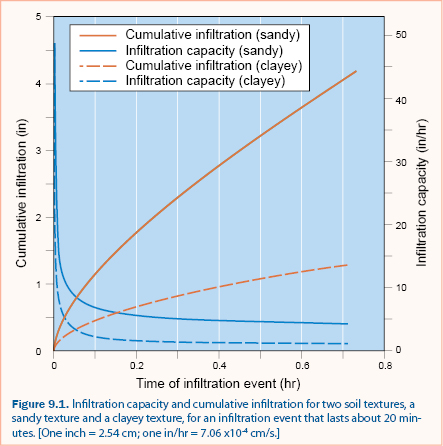